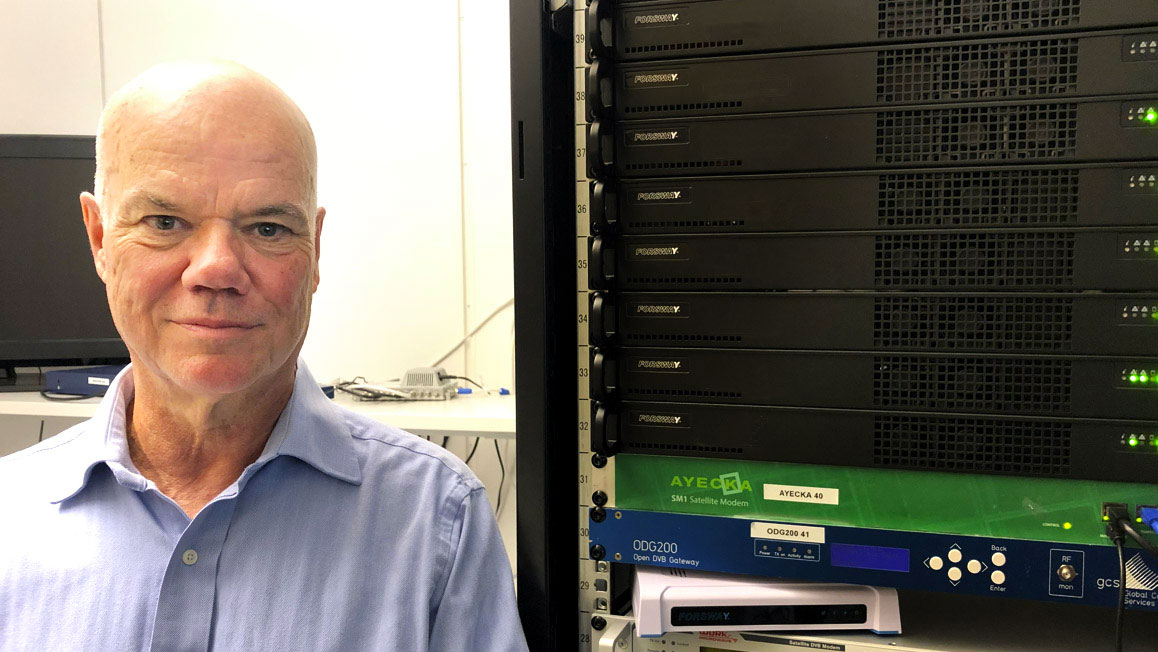 The Gothenburg region and western Sweden have a long history of space and a prominent position in the international space industry with both large and small companies, prominent space research and world-class education.

Mats Andersson worked with antennas for satellites at Ericsson and Saab Ericsson Space in the 80s and 90s. From 1998 to 2014, he worked with wireless broadband at Ericsson, Bluetest and Huawei. Since 2014, he has been back in the space industry, but no longer with a focus on satellites, but he is on the ground side, including as chairman of Skövde-based Forsway and Gothenburg-based Satcube.

– The big problem with delivering broadband via satellite is not getting many satellites but making the terminals cheap enough. The new LEO systems with low-flying satellites from, among others, Elon Musk (Starlink) and Jeff Bezos (Kuiper) go from horizon to horizon in 10-15 minutes and then you should be able to follow the satellite with mechanically or electrically controlled antennas. It will be very expensive, one where the terminal costs maybe around 30-40,000 kronor. How can you then get broadband all over the world? I think Starlink and Kuiper will have big problems building cheap enough terminals to reach a mass market. Forsway today makes the world’s cheapest satellite terminals for geostationary satellites (GEO) by developing a modem that connects to a standard TV satellite that costs a few hundred kroner. You download internet via satellite but you do not send the signal back to the satellite because that is what makes satellite terminals so very expensive, but you use a simple modem and send via 2G, 3G or ADSL. Forsway’s technology to combine satellite capacity for reception and terrestrial networks for transmission can also make LEO terminals really cheap.

And what is the great benefit of this?

– Half the world’s population does not have broadband, which many do not think about. For many years, the differences between poor and rich countries have diminished, but now it is starting to increase again due to the efficiency of the internet. If people in rural areas in the USA, Africa or Eastern Europe are to be able to take an active part in business life and access to information, they need a broadband connection. But they do not need 5G with hundreds of megabits – 10 megabits is enough and it can be delivered with this Forsway system really very inexpensively. With 10 megabits in downlink, you can watch video and have a good connection on web pages. Forsway has delivered over 50,000 modems worldwide – right now we deliver to the Philippines, Indonesia and several countries in Africa.

You are also chairman of the board of Satcube in Gothenburg – tell us!

– Satcube on Lindholmen, in Gothenburg, makes the world’s most portable satellite terminal. The development is located on Lindholmen with production located in Karlstad. The terminal is a bit larger than a laptop and you can take it with you all over the world and access 10-15 megabits in both uplink and downlink. We have sold it to organizations such as the UN that need broadband when personnel are out in the field in, for example, Africa, and we have sold it to Japan where the terminal is needed by rescue personnel after earthquakes. Media companies are also extremely interested. Satcube’s satellite terminal is in a high price range, but these customer groups have the resources. So, we have two world-leading companies here in western Sweden on satellite terminals – Forsway with the world’s most cost-efficient satellite terminal and Satcube with the most portable. It is extremely exciting that we can have these products when you think about the competition

How can we develop this type of product in western Sweden?

– It has its origins in building up a lot of expertise at Chalmers and Ericsson, first in radar, then with satellite communication, then mobile communication. This is about advanced antenna designs with very innovative solutions for transmitting and receiving and it is competence that has been built up over many years. I usually say that if you go to California you will find a lot of good engineers on cell phones and if you go to the east coast of the United States you will find many who are good on military radar. But I think it is difficult to find an area where you have so many radio and antenna engineers in so many varied areas as we have in Gothenburg. We have radio links, we have mobile phones, base stations, flight grades, Bluetest which is a world leader in testing antenna and radio performance, we have RUAG Space, Omnisys. It is this breadth that is found in Gothenburg that is unique.

How do we safeguard this breadth?

– Chalmers University is an important part of this. The biggest problem now is finding engineers with the right skills because we have so many companies that are successful. So, we need to make space interesting. And it is important that we continue to have a lot of international contacts and an international market so that there will be some volumes to talk about.