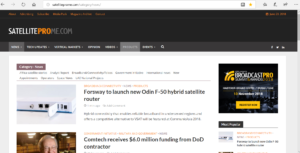 Hybrid connectivity that enables reliable broadband in underserved regions and offers a competitive alternative to VSAT will be featured at CommunicAsia 2018.

Commenting on the company’s service, Tobias Forsell, Managing Director, said: “Total cost of ownership for internet over satellite providers is dominated by the satellite capacity cost, with terminal cost being secondary. The advantage with the Forsway solution is that our technology uses much less satellite capacity than VSAT as we direct low capacity traffic over the 2/3G or xDSL downlink instead of using the satellite downlink. Another advantage is that there is no need to gain a satellite communications license.”

Forsway will also feature the Freya F-55 hybrid terminal which taps and combines Odin features with the functionality of a modern TV/PVR receiver. This combination furnishes TV operators with the possibility to easily integrate internet-based services – all with one end-user client device. The combination of IP over satellite and HDMI output also enables the latest offerings such as multicast content displayed directly on a TV and push VOD (Video On-Demand) content.
During CommunicAsia, Forsway will provide a video series featuring recent deployments in India.

Forsway will be co-exhibiting with integration partner Developing Infrastructure at Stand 1H3-01 at the Marina Bay Sands Exhibition Centre.